Summer has always been characterized by a seasonal decline in transportation rates in the market. Forwarding companies take this factor into account when preparing annual contracts with their customers.

The year 2020 was absolutely nontypical due to the well-known circumstances. The disruption caused by the COVID-19 pandemic has changed the global logistics market for a long time accelerating certain trends and bringing great changes to common seasonality.

Experts forecast that there will be no usual seasonal rate cuts this summer. TELS managers confirm that as of the beginning of June rates stayed at the level of May peak season without any signs of a decline.

The rates are maintained due to the following factors:

1. Uncertainty in the near future. Market participants had always known that the demand fluctuation curve in the current year would be the same as in the year before. Summer recession was always followed by an autumn increase and New Year’s peak. Therefore, it was possible to decrease the margin slightly for a short period of time in order to increase the general capacity. However, no one has been able to make any certain forecasts since the previous year, which explains the reason why carriers do not hurry to cut the rates, especially against the growing costs.

2. Cost increase. Driver salaries and fuel costs are the major expenditures for transportation carriers, which are growing. The problem with the shortage of drivers persists. This forced some Western European countries to increase driver’s minimum salary at the legislative level. The growth in the global level of driver’s salaries stimulates the increase in costs for transport companies in all regions.

The oil price is growing reaching the level of $70 per barrel. This in its turn increases the fuel cost.

This is only a partial list of factors. Customers, especially those searching for shipments from the EU to the Russian Federation, should not expect a reduction in rates this summer season.

In some sense, the cargo owners who have signed long-term contracts with an agreed level of rates will benefit in this situation - nothing will change for them in terms of logistics costs (unless the rates shoot up for some reason). Those who have not signed such contracts counting on a seasonal decrease in transportation costs will have to accept the new circumstances and prepare for the costs which will be higher than expected.

Will the rates continue to grow?

The data provided by the analysts from the Marketing Department at TELS Group state the expectations that the transportation rates will be steady this summer and point to their possible further growth. Starting from February, the rate growth curve for transportations from the EU to the Russian Federation has been steadily going up inverting the dynamics of 2019 and 2020. (The graph presents a polynomial trendline used for large fluctuations in the data.) 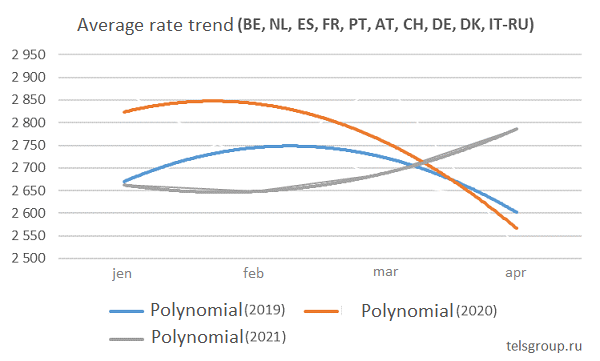 This is a general trend in the EU market, which does not always coincide with the rate behaviour in individual countries.

The rates from the Netherlands as of April 2021 are around 30% higher over April in the previous two years. Shipments from Belgium in April were almost the same in cost.

The rates from France this April were slightly lower against April 2020, but the curve has changed from negative to positive since March. Transportation costs from Italy are steadily going up.

On the average, transporting from Spain was slightly cheaper during January-April 2021 against the same period in 2020. At the same time, the rates in April were significantly higher from Portugal over the previous year.

Growth rates from Germany are high, while the growth curve from Austria is much calmer, but it’s also going up.

From everything mentioned above, it is evident that the rates will continue to grow, at least for the moment. Excluding the unexpected events that may occur in the market, the participants should prepare for the increase in international transportation costs.
This website uses cookies to personalize content, to advertise our services, and to collect website usage statistics. We share this information with our site analytics partners. In your browser settings, you can disable the transmission of cookies or use fake cookies. The Services are provided "As Is" and if you continue to use the site, you consent to our use of cookies in accordance with Terms Of Service and Privacy Policy.