After a 2-year decrease in road transportation market between the EU and Ukraine, it has been steadily growing since the beginning of the current year. Within the first 3 months in 2016, the volume of goods imported by road from the European Union to Ukraine increased by 24.1%, up to 1,063 thousand tons, against the same period in the previous year. 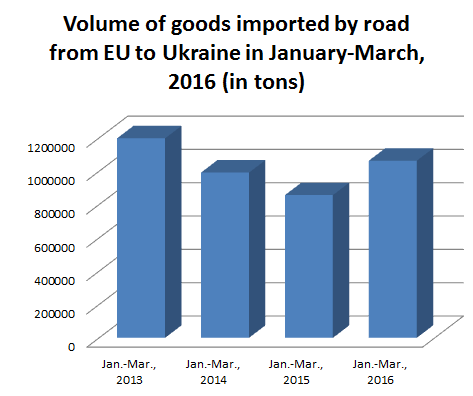 Road transportation has grown from 23 EU countries while goods imported from Finland, Spain and Estonia have decreased.

The increase of imports is observed throughout the whole Eurostat classification of goods. Import of agricultural goods has mainly grown due to non-food products. As for ready-to-eat goods, import of meat has grown noticeably. Besides, import of metal-rolls, building materials, chemicals (including goods of medical purpose, perfumery and household chemistry) has increased. Import of vehicles and agricultural equipment has grown considerably.

Statistics. Road transportation market between the EU and Ukraine in the first 3 months of 2015/2016


One of the major reasons for the growth of road transportation from the EU is a considerable decrease of goods turnover with Russia against severe political infighting as well as developing trade relations with the European Union under the agreement on EU & Ukraine association. All this has led to partial replacement of Russian products by European goods.

Prepared by Marketing Department of TELS group of companies according to the data of the Statistical Office of the European Union, State Statistics Service of Ukraine, Interfax-Ukraine News Agency.