After the collapse in January 2015, the transportation market from Poland to CIS countries was showing positive dynamics until May. Since June 2015, cargo transportation to Russia and Ukraine has been increasing, while exports to Belarus have decreased dramatically. 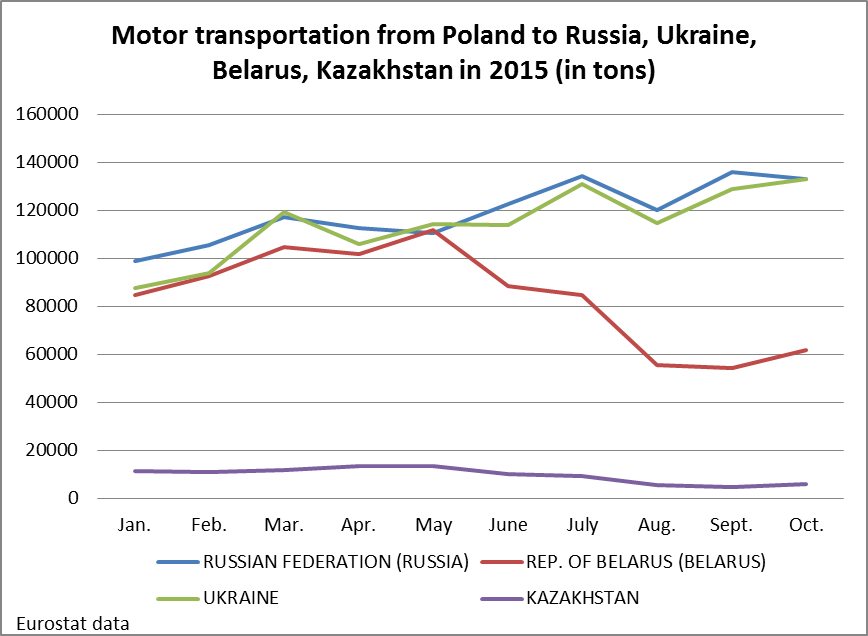 As compared to the period from January to October of the year 2014, exports in the similar period of the current year decreased considerably. The fall in export of agricultural products to Russia was mainly due to the Russian food embargo, which came into effect in January 2014.

Over the period from January to October 2015, exports delivered by road from Poland to CIS countries, as compared to the similar period of the previous year, made:


In 2015, exports from Poland increased mainly what concerns the following groups of goods:


Until July 2015, cargo carriage volume transported from Poland to the Republic of Belarus showed almost the same dynamics and monthly volumes as in the year 2014. The dramatic decrease in exports to Belarus was observed in August and September 2015 as compared to the similar period of the previous year.

In the first half of the year 2015, deliveries of agricultural products to Belarus were on the increase. However, since August the deliveries fell significantly (they approximately decreased 3 times as compared to July 2015).
The decrease in export of agricultural products from Poland to Belarus coincided with the Decree on destruction of sanctioned goods at Russian border. It’s quite logical that the decree reduced gray-market and infringing manufactured goods exported from Poland to Russia via Belarus. At the same time, exports of ready-to-cook and ready-to-eat goods to Belarus increased considerably.

When speaking about exports of agricultural goods, the same tendency though in smaller volumes was observed in Kazakhstan.
***
What concerns imports to Poland from the Russian Federation, Ukraine, the Republic of Belarus and Kazakhstan in the year 2015, there was a remarkable growth in transportation market. The best tendency was observed in imports from Ukraine.