Automobile cargo transportation from EU to Kazakhstan during the first half of 2015 grew in supplies from Lithuania, Italy, Spain and France.

300.2 thousand cargo tons were imported from EU countries to Kazakhstan in the period from January to June 2015, which is 11% up on the similar half of the last year.

The major five suppliers from EU, which are Poland, Germany, Lithuania, Italy and the Netherlands, ensured 75% of general cargo traffic. 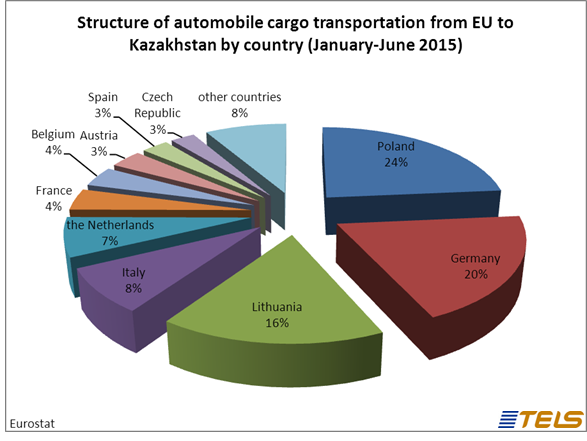 The largest cargo volume was accounted for:

The largest cargo increase in physical terms and high growth dynamics were observed in the following countries:

As for the other countries of Central Asia in the period from January to June 2015, cargoes imported by road transport from EU to Uzbekistan increased, to Kyrgyzstan – decreased.

According to figures from Eurostat. Data handled by Marketing Department of TELS group of companies.