From China to the USA via Russia. New Alternative in Supply Chains

Railway routes from China to Europe are also congested working at their limits. Maersk is warning their customers of the existing unprecedented disruptions in supply chains in Germany caused by congestion at the ports and very limited railway capacities.

The operator announced that the movement of freight trains to / from Germany is hampered by “the limited capacity of the network and speed restrictions” resulting in unpredictable delivery time. The strike of German train drivers has made the problems caused by the consequences of last month’s severe floodings even worse.

The OOCL Hong Kong container carrier reported the launch of a multimodal container service linking China to the east coast of the United States. The new service is the combination of Xi’an – Kaliningrad railway route (from where feeders transport the containers to Bremerhaven port) and OOCL ocean services (with further transportation to various ports on the east coast of North America).

The OOCL states that it is the first such service operated by a maritime carrier linking China and North America overland (via Asia and Europe) and by sea (across the Atlantic). The operator hopes that this will enable them to provide a reliable delivery service bypassing the congestion routes from Asian ports to the west coast of the United States and via the Panama Canal. 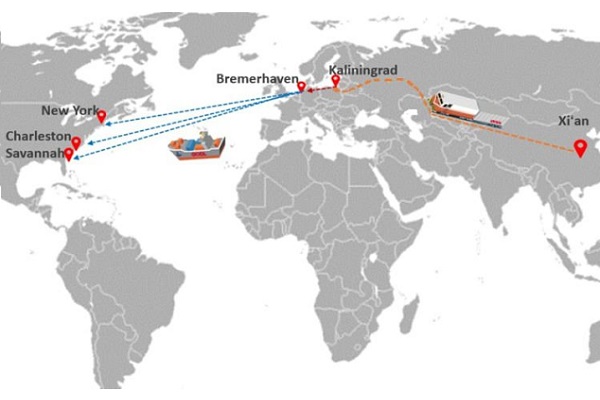