Freight Transportation Market Between the EU and Russia in 2013-2015

In 2015, the volume of freight transportation market (export and import) between the countries of the European Union and the Russian Federation expressed in physical terms totalled 19.304 million tons of cargoes, which is 13.9% less than in the year 2014 (similar fall totalled 10.9% in the year 2014 as compared to 2013).

In the period from 2013 to the first six months in 2014, freight transportation market between the countries of the European Union and the Russian Federation decreased mainly due to the reduction in export of industrial equipment and manufactured goods. This was for several reasons.

The major reason for the reduction in export of the above-mentioned goods was the general market fall and the decrease of vehicle and equipment sales among consumers and industries.

Moreover, considerable reduction in cargo transportation happened due to the European sanctions against Russia regarding the limitations of import of certain equipment and the limitations of access for big Russian banks to European funds, which in its turn decreased investment assets of Russian industrial groups.

In 2014, Russia imposed countersanctions in the form of import embargo on certain manufactured goods from the European Union.

This conditioned the decrease in cargo base of import freight between the countries of the European Union and the Russian Federation, which totalled 19%.

Growth of Export Freight in 2015

In 2015, freight transportation market between the countries of the European Union and the Russian Federation was characterized by the following peculiarity: a considerable increase in export freight against the continued decrease in import.

9787 thousand tons of cargoes were imported to Russia from the EU in 2015, which is 32.3% less than in the year 2014. Export from Russia to the countries of the European Union increased by 19.6 % totalling around 9517 thousand tons. The volume of import and export expressed in physical terms became almost equal.

Considerable decrease in export of mineral fuel and oil, iron and steel, non-organic chemicals to the EU made up for the increase in import of wood and rubber, metalware, goods produced by chemical enterprises, building materials, certain manufactured goods that became more attractive against the weakening of rouble. The growth of export was especially noticeable in summer in 2015. 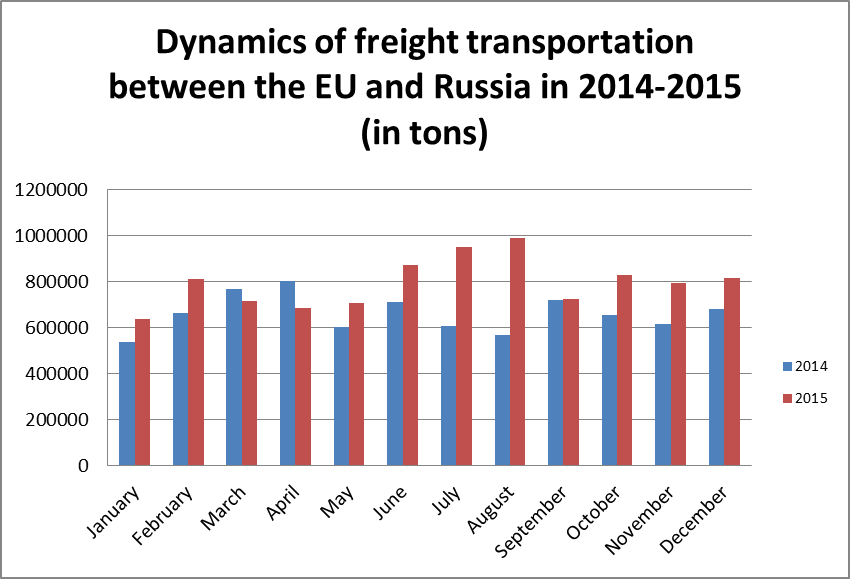 From the point of view of the countries of the European Union, the highest increase of freight took place in the Netherlands, Poland, Sweden and Finland. Export from Russia was especially high to the Baltic countries (Lithuania, Latvia, Estonia).

Prepared by Marketing Department of TELS group of companies (according to data from Eurostat).