In summer 2015 cargoes exported by road transport from Russia to EU grew considerably every month in relation to previous months of the current year as well as to the similar months of the previous year.

In the period from January to August 2015, 6 359 thousand cargo tons were exported from Russia to EU countries, which is 20.4% up on the similar period of the previous year. (Here and elsewhere, figures are specified according to Eurostat. Data handled by Marketing Department of TELS group of companies).

From June to August 2015, there was a rapid increase in export. In this period, as compared with the similar period of the previous year, growth dynamics made up 47.8% (+909 thousand cargo tons). 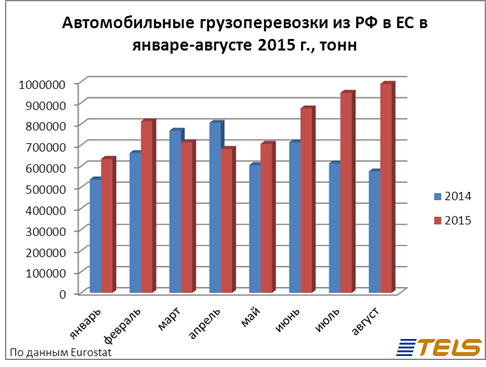 Automobile cargo carriages to EU increased almost in all large groups of goods except for oil products.

In the period from June to August 2015 when there was a decline in export of naphtha and distillate fuels, the following goods exported from Russia to EU increased considerably in physical terms (as compared with the similar period of the previous year):