After the heavy growth of cargoes imported by road transport from EU to Belarus in the first half-year of 2015, there was an evident reduction in cargo traffic in August and September not only compared to the previous months but also to the similar months of the year 2014. 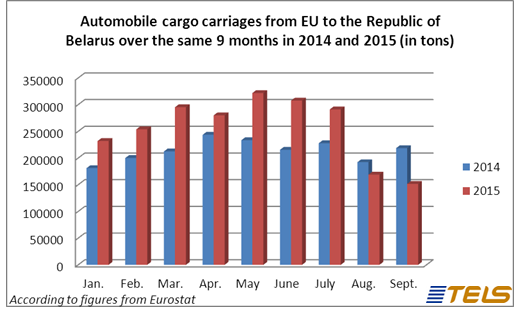 In the first half-year of 2015 fruit and vegetable imports made 65% of the whole cargo volume transported by road from EU to Belarus. The major part of the goods were imported from Lithuania, whose exports to Belarus increased over 3.5 times as compared to the same period in the year 2014.

August and September of 2015 are remarkable for the significant reduction in fruit and vegetables imported from EU to Belarus as compared to the previous months of the same year (in August imports decreased 3 times as compared to July, falling from 158 to 58 thousand tons). As a result, the annual volume of imports from Lithuania has declined despite the fact that Lithuania is the major forwarder of fruit and vegetables to Belarus.

It should be noted that it is the general decrease in all large groups of goods imported from EU to Belarus that has caused the sharp fall in the overall volume of cargoes transported by road in August and September 2015.

Facts provided by TELS. A considerable increase in fruit and vegetables imported to Belarus started in October 2014 when Russia placed an embargo on these goods imported from EU to its territory in August 2014. In its turn, Kazakhstan increased the import of these goods. As a result, in May 2015 the overall monthly volume of fruit and vegetable imports from EU to the territory of EAEU reached the index of July 2014 (the figures before the placement of the embargo), which made around 240 thousand tons of goods.

Apparently, stringent politics of Russia aimed at banning imports of European fruit and vegetables have finally produced and effect. It should be recalled that in August 6, 2015, the Decree on destruction of sanctioned goods at Russian border came into force. The following departments were empowered the right to decide on the destruction of goods: the Federal Service for Veterinary and Phytosanitary Surveillance (Rosselkhoznadzor), the Federal Service for Surveillance on Consumer Rights Protection and Human Wellbeing (Rospotrebnadzor) and the Federal Customs Service.